Being active in sports such cycling and running, San Fernando 2014 Duathlon Challenge played a big part in my life history. I’ve always wanted to get involved in any sports, achieve things that makes me feel proud and to be an inspiration to many. SFLU duathlon race is open to non-local residents under invitational category ONLY; the tour led and sponsored by Dagupan City Cycling Club. A week before, the team has decided to join the race and it was kind of rush to submit our names and paid them through Dra. Cicel’s help.

In the preparation of my 1st duathlon, I focused on running and monitoring pace and heartbeat. On the 1st day of one week of my self-training before the race, a 5k of running to finish in less than an hour every day is a deal. I was entirely focused of my body and mind controlling of how I would finish the 5k-15 k-5 k, run-bike-run. I should survive on the race no matter what. How I wish I can, then I realize it was exhausting and powerless to get into your bike after 5km running.

On the last 2 days training before the race, I hadn’t fully finish the transition practice, instead finished the 5km run 10k bike and went home tired and frustrated. I believe competing and joining races is not a joke and to fake that you are good into something isn’t worth at all. Then, I am afraid encouraging people to experience the passion I have like cycling and running because it only takes a person to see where he/she good at.

The truth is that I am scared to compete and to give all I’ve got because I might faint and get injured. As long my mind is set to enjoyment and finds mountainbiking and running makes me happy, I would wander and use the talent what God has gave to me. It was a day decision to come with the team and join the race; I apologize to the DCCC for being late that morning and thank you for waiting for me. 🙂

As I have said earlier, it wasn’t a joke at all! There are only 8 joined of us under FEMALE CAT, few of us are first timer and 3 are hardcore and been into lots of races and, here they are:

As a reward and proof that we finished the run-bike-run transition, a finisher shirt was given after the last 5km run. It was a priceless experience to keep and share to everyone! 🙂

The Post Valentine – Duathlon, Run for the Hearts was held at San Fernando City last february 16, 2014.

For duathlon TIPS check links below:

Yes the 13.1 miles challenge is indeed achieved in 2 hours and 48 minutes! As per Sir Tonypats told me, I had a quite good pace to start for a 1st time half marathoner. I’ve asked an advice to a triathlete Cicel Reyna, she told me to take a 10% step increase of every miles however, I did today was over 50%, it’s huge from 10km to 21km. My mindset was to focus and be determine and I had it!

Half marathon wasn’t really easy at all, I almost gave up in 15 kilometers and really exhausting. I run along with Jhong on the first 2km, a duathlete who won 2nd place in an invitational 2014 duathlon race at San Fernando La Union, we separated between 2 to 3 km and his distance is far of 2km already! Which, I am glad to chase him between 7 to 8 km distance. He was very fast like a road runner, it’s like 4 minutes per 1km, no wonder why he won!

Taking up the 13.1 mile challenge require a focus, commitment and a lot of determination to achieve. It is only in your mindset that tells you how you will start and finish it. Once you set a goal, you are bound to finish what you have started.

My inspiration on this 13.1 mile challenge are all the runners who have a courage and fearless to run long distances. Now, I understand how this runner felt after they reach their goal every time they run. It was a feeling of strong, confident, being awesome that only few can do it. Now, I am ready to inspire people to run and do more challenges! 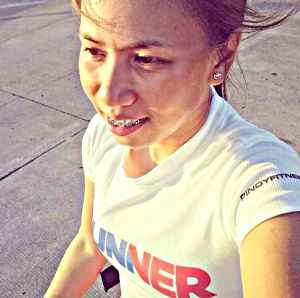 About time to do the half marathon!

If someone can, then I can do it, right!

I am ready tomorrow to challenge myself to a  twenty one kilometer run (21km) and hopefully will finish it strong! I know in my heart and mind that I can conquer! There’s no race and required payment to start my 1st half marathon so tomorrow I’m on this 13.1 miles challenge!

For tomorrow’s challenge, I would be wearing my one month old shoe Nike LunarGlide 5 which I already spent more than 50 miles already running and jogging with it, match it with my favorite pinoy fitness singlet and blue nike dri-fit shorts with orange lining and nikeplus tracking band. Fueling and hydrating is important, so I might wear fuel belt and bring chocolates. Actually, I have no training or program to follow that lead me to this challenge, so I’ll take it slow and not to rush, the aim is to finish it strong!

So wish me a good luck tomorrow!

Note from Running for Beginners: “Half marathon training involves a lot of groundwork, known as getting ‘miles in your legs’ but there will also be the variety of speed work, tempo runs and hill work. If you are considering running a half marathon, you should also spend some time doing weights in the gym and some cross training activities to avoid over-use injuries to your legs. If your aim is to enter a half marathon event then you should expect to spend about three months in half marathon training: this is if you have been doing some running already. If you have not run for a while or you are new to running then you should go through a 5K training program and expect to do at least six months training before you run a half marathon.”

A mountain bike challenge to join before the year ends (2013), this time should be outside my province (Pangasinan) and must try a different mountain bike trail course of Paniqui, Tarlac Philippines. The team went to Tarlac to shave their trail and taste our bitter sweet mountain bikes. Jaguar Team of Dagupan City Cycling Club – Mountain Bike, raced and beat those Tarlackenos. 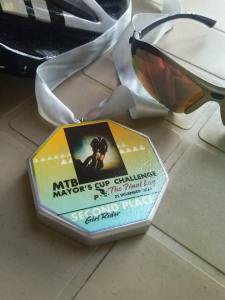 5am – December 21, 2013, my team drove two hours and a half excitedly, though I wasn’t sure if I could conquersince I’ve have never visited the tracks. Those mountain bikers near race tracks must be very confident and familiar with the trail. The course is a ride of thirty kilometers (30km) before you get into the finish line. Under female category, I will be competing with the only lady biker in Tarlac.

The plan is not to compete but to enjoy the track and finish it strong however, there are some points and weaknesses I saw on my competitor. She lives nearby the City so I assumed she practiced and visited the trail many times. The course has a 60% rough and “lahar” road and the rest is a vehicle road. On the first five minutes after they release us, I felt I wasn’t strong enough and so I just had to focus on my strength and goal. Along the course, it’s quite tough racing with her as we pass along each other; there are few bikers with her helping her I guess. Then two road bikers let her go and then blocking my way. They were riding racers and along the course a two way out and I was confused because of no signs. The two roadies don’t know the way out and has really intention to get me out of her way to finish line. Luckily, a woman pointed out me the way, and the two roadies followed. What a shameful tactics of those two just to save a lady without competing, a show off!

The confusing race didn’t stopped there, as I’m approaching the 3km to finish line a marshall pointed the wrong way, so I wasted 4km of ride. Well, now I understand some people can’t take the competition the right way. On my way to finish line, I saw the two freakin roadies who blocked my way inside the trail and tried to lost me, they smiled and cheered. Anyway, I was really disappointed on the event and my team has the same feeling, it is what it is and we just have to let go. My speedometer showed a 40km ride, and I wasted 10km. I know what happened inside the trail which insulted my strength, at least I had a fair and clean fight though I’m just a visitor with 10 guys who traveled that far and Dagupan mountain bikers showed how strong and friendly we are.

I have been practicing so hard to prove how strong I am to join the local bike race competition near our province (Dagupan, Pangasinan). One month of serious training with co-team, participants and racers who helped me get into the pace. I was determined so I put time and effort just to be on the right track. The long hours of ride under the sun and the uphills and downhills of mountain trails helped me become the best competitive mountain biker in my town to compete with other hardcore mountain biker ladies. There are times I am scared and worried on the performance I’m going to give on the race though my team are always behind my back to cheer me up and they’re very confident that I can finish the race strong. The biggest inspiration of me being passionate into mountain bike sports is who I will become after the race and those who believe in me that I can, those are people close my hearts.

We traveled from Dagupan to Urdaneta, with Dagupan City Cyling Club (DCCC) Mountain Bike Team, it’s approximate 20-25 kilometers. It’s not the first time of my team to race, I am the first timer! I even had stomach problem due to my nervousness breakdown, it’s quite embarrassing that I had lbm going on and it happened twice and peed several times. When we finally arrived the town of Urdaneta, I got a feeling of excitement, boost energy, as we passed some of the local mountain bikers. My team are also excited I know, as I’ve been quiet and taking moments on myself to calm and bring out the confidence, then men are discussing their tactics how to pass and not let in the other competitors on their way, it is more on coordination since they have the same category, But, I know these men are competing to each other, to step up who’s stronger or strongest on the team, however at the end of the day everyone unites.

I have met three ladies who I bet they’ve been in the mountains for years with their mountain bikes. Very confident ladies and not even worried about the race, so I was just like being friendly and, knowing I will be the last lady at the finish line

My mom is very supportive on the new sport and passion I got into, which she can relate because back to her young and wild generation days she was very competitive and an athlete. She felt I was an upgraded version of her and I’m so happy for her being supportive mom. 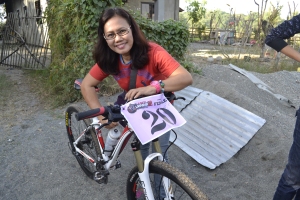